Zen and Martial Arts, My Story

I have been fortunate to study with truly great authentic teachers both in kung fu and in Zen.  All of my teachers came from a lineage of true masters and were uncompromising in their teachings.  They did not ‘Westernize’ their methods or dumb them down so they were more palatable to Americans.  Most of what I see in Eastern thought or martial arts as taught in this country is a highly watered down version from their origins.

I started my martial arts training in the early seventies at age 19.  Without going into the long story of how I ended up here I will tell you that I went door to door in Philadelphia’s Chinatown asking the merchants if they knew any martial arts schools.  A fellow in college had told me ‘walk around Chinatown, they are everywhere’.  Actually they were nowhere to be found.  I ended up at the Wing On Grocery store on Race Street between 10th and 11th.  I asked the owner if he knew of any karate/judo/kung fu schools in the area.  I had no idea of the cultural differences between the schools and asking a Chinese fellow about Japanese schools was a non starter.  He waved me away, my 5’9″ 129lb frame, telling me “Go, Go”!  At that moment I felt a large hand land on my shoulder and a large, muscular Caucasian man spun me around to face him.  He had a big crate of cabbages on his shoulder and demanded, “Why are you bothering this guy”?  I went for broke, hoping he wasn’t going to crush me and told him.  He looked at me quizzically and then turned to the merchant and much to my surprise spoke to him in perfect Cantonese.  The merchant looked at me and said, “You too old, you too old, in China we start training at 8 years old, you too old”.  I thought for a second and said, “Well in ten years I’ll be 29.  I can be 29 with ten years of training or 29 with no training, which is better?”  He thought for a second and said, “OK, OK, go to red door at 10th and Arch street, 7 PM, someone will meet you”.  At 7 PM I was at the red door and a fellow by the name of Tommy Chin came walking up introduced himself and led me inside.  The school was the Kwong Sai Jook Lum Tong Long Gee Pai or the Bamboo Forest Monastery Family of Praying Mantis Kung fu under the auspices of Sifu (master) Gin Foon Mark.That was over  4 decades ago and I still train. To this day I still see Sifu Mark Foon at 91 years old.

It was also at this time that Wing Tsit Chan sent me to Dr DeMartino and Zen.

Now after all these decades I would like to draw a parallel between the martial arts and any sort of Zen training or inquiry.  In the kwoon (school) we had a set way of training our bodies.  We did extensive leg training and maneuvering.  We conditioned our arms and did endless blocking, punching and kicking drills.  This style of kung fu is known for its efficiency and speed and is not flowery and acrobatic.  Get the job done fast and effectively.  I spent years training and then went to several other styles to learn.  Each has its own modality and theory of fighting and each its own philosophy. Often students of one style would disparage those from other schools as not being authentic or effective.  Not unlike the supposed rift between Soto and Rinzai in Zen or any other form of religion.  There was always this thing about “Ten Years of Training”, after ten years I’ll have it, I’ll be great.  I know this is based on the observation that those who spend approximately 10,000 hours of practice in any discipline, be it classical piano or martial arts, that they will attain a certain level of skill.  This is partly true but it depends on what you are training for.  I’ve said many times in my martial arts teaching that you cannot teach swimming standing next to the pool; you have to jump in.  You cannot learn to fight unless you fight.  No amount of conditioning will ever prepare you for the onslaught of some nut who wants to hurt you.  If you have not trained your mind to face the onslaught you will fold in seconds.

I had this ‘awakening’ in my own training when I faced a young boxer from Joe Frazier’s gym in North Philly.  I had speed, technique and power but he had experience on the street.  He told me before we fought, ” I know I am going to get hurt but I am going to crush you”.  We put on light head gear and 6 oz gloves.  He attacked me like a wild animal with no concern for his safety, no give and take, no graceful martial ballet like in the movies, just a fang and claw outright attack.  He had me on the ground in less than a minute.  I had tried to defend myself, ward him off, but all he did was attack me.  He controlled the fight.  This threw me into a great depression.  I had trained years but all the technique and conditioning meant nothing in the fray.  This is the point in one’s martial training where they do one of three things: quit, attempt to make it a spiritual thing or face it head on. In my decades of training I’ve found that fewer than 5% take the last option.  Basically saying , ” I am going to do this even if it kills me”.

I did just that and for a long time got crushed but each time trying to learn and develop what the master did and how it was different from me.  So after years of training I started winning, my mind became entirely different, my awareness a whole new state and my focus unwavering.  I have been fortunate in my professional life to work with some of the greatest trainers and fighters of the last 40 years from boxing to martial arts.  I’ve met beasts and gentlemen and everything in between.  I’ve had huge guys pick me up over their heads like a sack of potatoes and little guys move so fast it was super human.  More than anything I’ve dealt with the real, not the theoretical.  All the trappings, ritual and forms of the training become tempered like the folds of steel in a samurai sword, many layers becoming one form.  The art disappears but the human form remains.

Now the problem.  When I deal with most people who train in martial arts it’s about the technique, the form , the ritual, the rank and the belts with almost total disregard for whether or not their art actually works in real life.  There is a myth in martial arts that  ‘if I show you what I really know it’s too deadly, I can’t show you”.  This is a total fairy tale and one that I, too, thought for a while.  The art is lost to the form of the art.  This is exactly what I see in Zen teaching and training today.  It’s not about resolving an existential problem but about expressing the form of Zen, the ritual, the chants, meditation, sitting, walking and other forms.  Yes, they are a path like the physical training is in martial arts but when do you discard the path?  When do you cut through all the trappings and reach the core?

Many martial artists say to me, ten years I’ll have it and Zen followers say, ‘maybe in the next lifetime’.  When the sword is to the throat, real or metaphorically, what do you do?  Death is the sword that comes for all of us, the born. 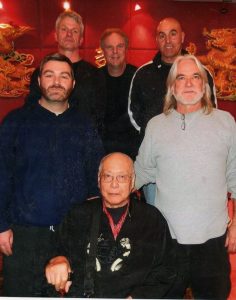